English: An Officer Big Mac jailhouse with a mouth/burger/jail for kids to climb-into. It was part of the 1970s era “Mcdonaldand” playgrounds. This one is on display at a McDonalds in Calexico, California. (Photo credit: Wikipedia)

Let’s face it: McDonald’s may be the poster child for everything wrong in American culture NOW but when we were kids it was the poster child for everything right (food the way you like it right now with a toy and a killer business model) and McDonald’s conquered the world wide market during exponential growth from 1980-1990. 80s kids remember when Happy Meals had real toys and ‘fruit’ hadn’t yet made it fast-food vocabulary (fruit is only fast if it’s pre-peeled); when Ronald McDonald was somebody to get excited about and if your kid choked on a Happy Meal toy it was your own damned fault for letting them stuff a whole matchbox car in their mouth. 80s kids will also remember the downfall of fast food- the health craze that swept the country and pulled McD’s right along with it- adding no-cholesterol, no-fat, sandwiched-between-cardboard foodstuffs.  Those little cherry pies were never the same again.

Get reacquainted with the McDonaldland gang up through 1990: 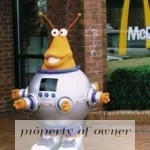 What was McDonald’s doing in the 80s?
1980– McDonald’s turned 25.
A floating McDonald’s opened on the Mississippi riverfront near the Gateway Arch in St. Louis.
Mike Quinlan became president of McDonald’s USA.
Renewal of McDonald’s most successful ad campaign- “You deserve a break today.”
McDonald’s ad campaign “Nobody makes your day like McDonald’s can.”

1982 – McDonald’s launches ad campaign “We cook it all for you at McDonald’s.”

1983– McDonald sets up shop in 32 countries around the world.
The Hamburger University opens in Oak Brook, IL.
McDonald’s launches its ad campaigns  “McDonald’s and you.”
Chicken McNuggets premiere on the menu.
The 45th billion hamburger is served.

1988 – Agreements are signed to bring McDonald’s to the U.S.S.R.
The 70 billionth hamburger is served.
McDonald’s launches ad campaign “The good time, great taste of McDonald’s.”