Commodore International / Commodore International Ltd. got its start in 1954 as the Commodore Portable Typewriter Co. and later, Commodore Business Machines, Inc under founder Jack Tramiel.  Tramiel (who would later go on to purchase Atari’s computer division) was the owner of a small typewriter repair business and also moonlighted as a cabbie. After the Japanese flooded the worldwide market with their own manufactured typewriters and crowded out North American makers, Tramiel got into the adding machine business (think those big clunky typewriter- looking things your dad may have a had a no less clunky10 key version of in the 80s). The Japanese lost no time lunching into these as well in the 60s, again knocking their western counterparts out of the water. Tramiel figured if you can’t beat em join em, and went to Japan to figure out just how his competitors were getting ahead so fast. He came back ready to launch into electronic calculators.

Commodore did well with calculators with both consumer and programmable calculators until Texas Instruments came around with a cheaper product in 1975.  Though the competition pushed Commodore out of the calculator business it didn’t squash them. The 70s also saw many other electronics products come into market such as peripherals and the game Chessmate in 1978. Arcades were coming into popularity and from them, home gaming systems, and from them, home computers. in 1976 Chuck Peddle took over Commodore and steered Jack Tramiel towards those home computers, the market’s newest darling for the consumer outside of university labs and government facilities. “Computers for the masses, not the classes.”

The Commodore Educator 64 also known as the PET 64 and Model 4064 was a microcomputer made by Commodore Business Machines in 1983. In a time where Apple dominated the the schoolmarket, the Educator64 was sold to schools as a replacement for aging Commodore PET systems. This Educator64 is running the open source computer operating system. Contiki. (Photo credit: Wikipedia)

Their first endeavour, the Commodore PET (Personal Electronic Transactor) was a single board design with a metal case and came with a full QWERTY keyboard, monitor and tape recorder. PET came into the world the year of 1977 and thus secured Commodore onward as a computer company.

PET became the BBC-Micro of North American classrooms, sometimes called the “Teacher’s PET” in promotions. Primarily a learning machine, PET wasn’t showy; not too strong on graphics or sound so tanked in the home computing market- people wanted to game, not spell on their machines. Realising this, Commodore put out the VIC-20 in 1981 with ads featuring Star Trek veteran William Shatner to challenge home buyers- “Why just buy a video game?” Truly, from the days of single game cabinets like Pong, why stop with one when you could not only own a piece of equipment smaller than your coffee table that didn’t share your TV screen either and boasted multiple game capability? Sign me up!

But in 1983 the prices of VIC-20 and 64 were reduced and began a computer war between Commodore and competitor TI, which had introduced the TI-99/4A in 1981. Atari jumped into the fray and was followed by most of the time’s other manufacturers. By the end of the skirmish C64 came out on top as the best selling computer in the world.

Internally, however, things weren’t so cozy. Members of the board of directors at Commodore jumped ship in 1984. Even Tramiel went packing to form Tramel Technology. In the meantime Commodore bought newer company Amiga Corporation in the fall of that year and named it Commodore-Amiga. Under Amiga, Commodore brought to market the 32-bit Amiga 1000 (Codename: “Lorraine”) in 1985. Too bad Tramiel had already jumped on board with Atari and with the hard work of former Commodore engineers released the Atari ST for significantly less money. Interesting politics here- before Amiga joined Commodore, Jay Miner (formerly with Atari) approached the new Warner-owned division of Atari for needed funding. Out of this, Atari got one year exclusive use of Amiga’s design as a videogame console. At that time Atari could add a keyboard and sell the Amiga comuter, originally called 1850XLD. When Tramiel bought Atari’s Consumer Division in 1984, he got the console and home computer departments- cha-ching. 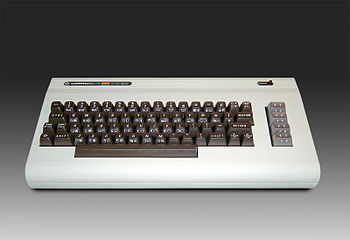 The drama continued, however, between Commodore and Tramiel with suits and counter suits up until 1987. Tramiel believed ‘business is war’ and he won the war- all suits against him for copying technology were dropped. Now there was left the battle between Atari and Commodore to be waged.

Since the days when Commodore 64 and Atari 800 went to the shelves head to head, both parties hit each other where it hurt- on TV. Neither company held back and some of the product fanatacism that has survived these 30 odd years can be attributed to this sort of guerilla marketing. Amiga 500 and Atari ST took up battle arms in 1987 with Amiga coming in first though Apple Macintosh blew it all away, pushing personal computing towards Windows and PC Clones.

The late 80s truly shifted over to IBM and Apple and by then Commodore had lost its heart for competition in this area in order to shift focus onto other products. The Digital TV system CDTV was ahead of its time- demand for such a product would not come for a few years still in the consumer market.

But Commodore soldierd on in computers through the early 90s with the Amiga 3000 (unique for its Soundblaster sound cards) and PC Compatibles, the A600 and A500, A4000, A1200 and in 1994 a 32-bit CD ROM game console, CD32 which didn’t make enough to carry the company back from the brink.  Commodore declared bankruptcy in 1994. 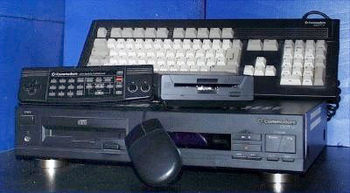 According to Tramiel, Commodore was named after Opel Commodore, an executive car from Opel produced from 1967-1982. There is some debate about this as the car didn’t go into production until after Commodore was established in the 1950s.