In 1982 General Consumer Electronics (GCE) brought the world Vectrex, a 14″ tall black and white screen game console featuring a 9″ monitor; the only home game system at the time to feature a vector-based screen. The story goes that GCE’s president was in Asia when he was approached by an Asian businessman that had a warehouse full of cardiogram monitors selling for cheap. GCE bought that shipment and designed their Vectrex game console using those monitors. Vectrex sold well at 199.00 but once inventory ran out, another trip to Asia was warranted. This time around the same deal couldn’t be worked out and Vectrex’s production closed. This report is claimed to be untrue by GCE, saying the problem was manufacturing 9″ monitors because the industry standard gradually became bigger. These monitors were made in Hong Kong.

The official Vectrex story is that hardware designer John Ross of Western Technologies had the idea for a mobile videogame unit that would display vector graphics on a built-in monitor and the idea came from a CRT monitor. He pitched this idea to Jay Smith of Milton Bradley and they named the new concept Mini Arcade. Mini Arcade was pitched to toymaker Kenner (think Strawberry Shortcake, Care Bears, KNight Rider and Batman toys). But Kenner was looking for something smaller and not so mobile (not mobile? WTH?). Western Technologies got back into the mix and redesigned the concept as a tabletop model –-because you know the 80s family needed a sit-down screen to commune around that decade to keep the kids off coke-– but later GCE got the idea that future gamers might want to take their games with them and redesigned this as the 9″ screen. No one could decide what to call it so several copyrights later the Vectrex made it to show at the Summer Consumer Electronics Show in 1982 under its title proper. 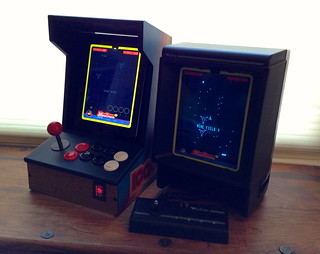 To fund Vectrex GCE manufactured game watches to pull in money.Trying for advertising in Toys ‘R Us, Vectrex was turned down on grounds that GCE was too small for advertising in their store. To combat this, GCE went grass roots and sent thousands of samples to kids subscribed to Boys’ Life Magazine. These magazines included instructions for kids to request the Game Time watch at local stores. Enough demand was created at Toys ‘R Us by grubby little kids bawling for their promised watches that the toy giant caved and began carrying GCE products.

As a product Vectrex was a good idea- kids liked games, end of story- but parents and developers liked the fact that the mobile unit freed up the television. Mum and Dad could watch the news in one room and Junior could shoot down fighter pilots in another. But right out of the gate the unit fell behind in production due to funding issues and the public on the whole didn’t feel so cozy about the black and white screen. And why should they? Television had been rotting brains in colour since the 60s. To answer this dilemna GCE developed semi-transparent colour overlays akin to transparencies you might use for an overhead projector and similar to what the Magnavox Odyssey was already using. These overlays not only provided colour and instructions for the player but also reduced flicker in the display. Engineers weren’t so fond of them because additional code had to be added afterwards to the games once already finished to account for the on screen display. That is a bummer.  But sales went up with this addition and shipments of the new improved Vectrex began in 1982, taking in $80 mil USD before the Great Videogame Crash of 1984.

Vectrex did well in the holiday season of 1982, so much so that Milton Bradley bought out GCE in 1983 and took Vectrex to Europe and then Asia through Bandai, renamed as The Computer Vision Kousokusen / Bandai Vectrex Kousokusen. Later add ons developed for Vectrex included the Light Pen, a 3D Images headset and Art Master cartridge which all allowed for more colour and interaction with the screen.

Unfortunately no-one was spared some damage in the Great Videogame Crash of 84. Milton Bradley tried to take down prices like the Berzerker tried to take down Evil Otto but still lost millions in May of 84 and merged with Hasbro, discontinuing Vectrex. Although there have been past plans by Smith Engineering to resurrect Vectrex as a handheld game system, Nintendo’s Gameboy put that plan to rest. Vectrex isn’t lost to those pine for it- Jay Smith opened up the games to public domain in the 90s. Play games online for free here. Or build your own Vectrex with helps and hints at PlayVectrex.com