While the Magnavox Odyssey had been around in some form or another since the late 1960s and the Odyssey2 didn’t premiere until 1978, the direct contributions of these consoles to ’80s gaming history must be noted.

Ralph Baer (inventor of the video game as we know it today) originally set out in 1951 to work on an ‘interactive game’ for electronics company Loral under the direction to ‘build the best television set in the world.’ The interactivity that Baer pursued wasn’t well received and wasn’t picked up again until 1966 while Baer was at Sanders Associates. Baer went back to the drawing board, proposing a 2-player ‘chasing’ game with an electronic gun being added to the design in 1967 to shoot targets on screen for demonstration. Following this with the world’s first video tennis game, Baer made an important contribution to game history with his ball and paddle development.

English: The “brown box” prototype of the Magnavox Odyssey autographed by creator Ralph Baer. In my opinion this is one of the most important pieces of video game history on display. Unfortunately it didn’t get into the sordid history of this console and Pong. Русский: “Brown box” протопип видеоприставки Magnavox Odyssey (Photo credit: Wikipedia)

Next came the Brown Box prototype, picked up by Magnavox which originally used colour electronic backgrounds but this proved costly and by the time Odyssey came to market this feature was nixed. Odyssey, the world’s first home video game console, came to sale in 1972 with that late-60s tennis game; Baer’s creation beating Atari’s Pong by 3 years. Odyssey featured plastic colour overlays in favour of Baer’s origininal backgrounds much like those the GCE Vectrex would later emulate; it also boasted a wealth of over 300 total accessories including additional paper money, poker chips, score sheets and dice which made gaming with the Odyssey something of a hybrid between video and board game.

Not just the world’s first home console, Odyssey also featured the world’s first light gun accessory (think NES’s Duck Hunt), named Shooting Gallery. It had some flaws in sensitivity, notably that a player could rack up extra hits by shooting towards a light bulb. Ah well, everybody likes a cheat in a video game. Magnavox also looked into a prototype by Baer for an electronic rifle but never followed through on this.

A smash hit, Odyssey sold nearly 100,000 units by 1972 with a total sales reaching around 350,000 within two years. Like most other video game companies of the 1970s and 80s, Magnavox was in and out of court for patent infringement with Atari (in regards to Pong), Coleco, Mattel, Seeburg, Activision and Nintendo over Odyssey but overall suffered little damage from its competitors.

Eventually sales fell, ultimately due to the worst move in marketing on Magnavox’s part- dealers gave the impression that the console only worked with Magnavox television sets which turned away many a would-be buyer. Do you run out and get a new tv every time a new Xbox comes out? Well, I sure can’t on my salary! Light gun accessory sales also failed for much the same reason. When even agressive price slashing couldn’t save Odyssey, Magnavox regrouped and exported it around the world in 1974. Versions were sold in Germany (Odyssee), Mexico (Odisea), the UK, Australia, Belgium, Greece, Canada, France, England, Israel, Switzerland, Italy, and Venezuala. Spain and Sweden also sold their own clones- Overkal and Kanal 34, respectively.

Following the early 1970s success of the Odyssey series, Magnavox released the Magnavox Odyssey2 in 1978 as its 2nd generation console, designed by Ron Bradford and Steve Lehner. Improvements from the 1st generation model included individual gaming background/ foreground graphics per game, an alphanumeric keyboard similar to that of the British Sinclair ZX81, joystick controller, speech synthesis unit add-on and removable joystick on later models (early 2nd gen console joysticks attached at the back of the console).

Well known for the Master Strategy Series games which also came with board accessories, Odyssey2  took off where Odyssey left off with its unique combination of board and video games. Though weaker in graphics than competitors Intellivision, Astrocade and Atari 2600, Odyssey2 raced ahead with unique game characters and went down in ’80s history as a major video game contender, selling over 1 million units by 1983.

One would think Maganvox would have learned the first time around that the more diverse your product the better your sales but apparently not, as there was no 3rd party support for the Odyssey2, making its game catalogue inherently limited. Previously in 1974 electronics company Philips bought acquired Magnavox and while Magnavox was monkeying around with Odyssey at home, Philips released Odyssey2 as the Videopac G7000 in the foreign market. This move opened up to Parker Bros and Imagic to produce additional games later porting to US store shelves, Demon Attack and Atlantis. Later foreign releases of Odyssey2 were Videopac (Europe), Philips Odyssey (Brazil), Magnavox Odyssey (Brazil), Philips Videopac C52, Radiola Jet 25, Schneider 7000, Siera G7000, Philips Videopac G7200 (Europe), and Odessei2 (Japan).

Strangely, despite electronics import bans throughout the 80s, Odyssey2 had its most successful sales in Brazil due to less local manufacturing competition (limited mostly to Splicevision, Atari 2600 and Intellivision).  Like Odyssey, with Odyssey2 it is a mistake to assume joysticks are analog, they are in fact digital. Its games have similar elements as the memory available could display 64-bit ‘sprites’, which are programmable video objects that were reused in Odyssey2’s library by programmers. Voice (U.S.) and Chess (Europe) modules were also developed but the Voice’s sound did not play through television speakers so quality was limited. Yet it did put out advanced sound effects such as actual words spoken by game characters.

Odyssey2 is also probably best known for its Master Strategy games: Conquest of the World (1980), Quest for the Rings (1980), The Great Wall Street Fortune Hunt (1983) (honestly? Here kids, grab a joystick and we’ll sit down and learn all about Mr. Trump. Isn’t lovely? Would you like some tea? Mr Trump likes tea…), as well a Sherlock Holmes game that was never actually released.  All three Strategy games came with accessories such as game boards, chips,  metal or plastic game figures and maps.

In 1983 the Great Video Game Crash descended on all manufacturers and to avoid closing completely, Philips Magnavox developed an 8-bit system first called Odyssey3 but later changed to Odyssey Command Center. A new and improved keyboard was added, built-in joystick holder, and would have had a voice synthesizer and ability to connect to the Philips laserdisc players. Hey that sounds great- so what happened? 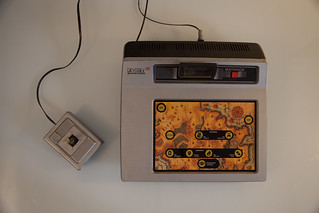 The Quest For the Rings (Photo credit: Abstract Machine)

Not happy with the Command Center moniker, Philips renamed it Probe 2000 (after the X-Files I’m not so sure anyone would have bought that now…) and intended to compete against the reigning computer systems on the market, leaving its console days behind. Odyssey/ Probe 2000 released a couple of titles: Pursuit of the Pink Panther and War Room which was also ColecoVision compatible. But a chip shortage spelled the end for Odyssey2. There was no way they could manufacture enough for the Christmas season and Magnavox knew it. So Odyssey2 did what all the greats do, rode off into the sunset quietly to make room for the new video game craze of the 1990s led by NIntendo but largely made possible by the path set before them years ago by Magnavox.

**If you are a video game buff or just want a very interesting read on the history of gaming Pong-Story.com is an excellent read and tribute to Ralph Baer’s work.