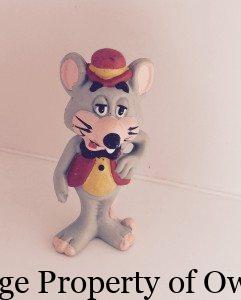 Nolan Bushnell, in an attempt to get more Atari games into the marketplace, opened Pizza Time Theatre in 1979. Based on the idea that he could market games to children and they’d bring adults in tow, Bushnell thought he could win over parents subscribing to the “video games rot young minds” mindset cropping up in the U.S. Pizza Time restaurants, influenced by Nolan’s love of Walt Disney characters featured Chuck E. Cheese, it’s own robot rat mascot formed after a coyote costume Nolan got at a trade show (original restaurant names were proposed to be Coyote Pizza, The Big Cheese and Rick Rat’s Pizza). Pizza Time Theatre featured a pizza restaurant, arcade and robot band that played musical shows while customers ate in a cafeteria-style setting. When Warner acquired Bushnell’s original baby, Atari, it also got Pizza Time but when Bushnell left Atari he bought Pizza Time for $500,000. Pizza Time took off due to the popularity of Space Invaders included in the restaurant’s arcade and players being able to cash in tickets at a counter for prizes. Soon Bushnell was selling Pizza Time Theatre franchises.

Three years after Pizza Time Theatre was formed, 204 restaurants had opened. Robert Brock, head of a large franchise of Holiday Inn hotels, asked about opening 200 Pizza Time Theatre restaurants in the midwest in 1979. Brock also managed Pizza Show Biz, which he intended to manage Pizza Time Theatre in contract with Bushnell. But when he met Creative Engineering’s Aaron Fletcher he saw that Fletcher could make better robots than Bushnell and decided to make his own chain. Bushnell would not release Brock from his contact and they ended up suing each other. Nolan won for breach of contract and was awarded restitution. Brock went on to partner with Aaron Fletcher to form Showbiz Pizza. The biggest challenger to Pizza Time, Showbiz Pizza featured the same fare but their mascot was a bear named Billy Bob.

Back in court, Showbiz opened a counter suit against Pizza Time and it was decided that there was insufficient evidence of trade secrets being unduly leaked. Showbiz ended up paying a portion of profits to Pizza Time for 14 years. But by the end of 1982 both restaurants no longer could rely on the country’s video game craze and profits plummeted. By 1984 bankruptcy was filed for Pizza Time and Brock bought this out and merged the companies to become Showbiz Pizza Place, Inc. Bushnell left the company after trying to form spin-off enterprises from Pizza Time Theatre and becoming unable to pay the bills. Back at Showbiz Pizza, the Chuck E. Cheese and Billy Bob characters began to appear in advertisements for the new merger. Regardless, Pizza Time and Showbiz Pizza still operated under their respective names.

During 1984- 1985 both restaurants employed novelties with their characters to keep business alive such as redesigning characters for Christmas and becoming more aggressive with marketing. Dick Frank became president of Showbiz Pizza in 1985 and lead the focus back to the original idea- food, family and fun. Restaurants in areas not pulling in enough profit were closed and remodeling of existing locations began which was successful in increasing profits and lead to new restaurants being opened within three years. In 1989 the company was publicly traded and Creative Engineering split completely with Showbiz Pizza by 1990. Back at Pizza Time the newly minted catchphrase Where a Kid Can Be a Kid came into marketing and was printed on Chuck E. Cheese game tokens for the first time. New show formats were implemented with shorter segments and birthday parties were catered to. New advances in animatronics made the old character robots more sophisticated with new video monitors and stage improvements. By 1992, with several ShowBiz Pizzas remodeled and closed, remaining stores were unified under the Chuck E. Cheese Pizza name.

But of course the name game didn’t stop there. In 1995 Chuck E. Cheese dropped the Pizza from it name and changed colour schemes. At that point competitor Discovery Zone had come onto the scene forcing the big mouse to pull more physical entertainment out of his bowler hat. Chuck E., who was officially a rat, was redesigned as a mouse to be more kid-friendly and indoor playgrounds were added to restaurants. Chuck E. Cheese did well with profits and with the new changes all locations including any remaining Showbiz Pizzas became one conglomerate dubbed Chuck E. Cheese Entertainment, Inc. by 1998. By the next year, Discovery Zone had filed for bankruptcy and Chuck E. Cheese bought them out, becoming number one in the genre.

Since 2000 Chuck E. Cheese has continued to grow and change and move more towards standardization across all their locations. In 2012 the mouse was redesigned and the restaurant has tested a varied menu beyond just pizza, with some locations even featuring gluten-free selections. The brass game tokens remain a hot collectors item having been redesigned and issued several times throughout the history of the restaurant and the robot entertainment which made the original Pizza Time famous continues to be perfected upon all the time.

Of course the big Mouse is not without controversy- several urban legends abound including a child getting poked by a heroin filled needle in a Chuck E. Cheese ballpit and tales of the animatronics coming alive at night.

Check out this list of characters featured in Chuck E. Cheese entertainment over the years:

For a trip down memory lane with the totally cheesy mouse including characters photos and tons of info, visit ShowBizPizza.com !