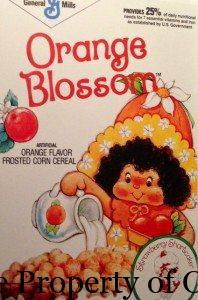 Lucky the Leprechaun Lucky Charms
Originally Lucky was an angry little elf plotting to get even with children for eating his cereal. Also known as Sir Charms and L.C. Leprechaun. Lucky Charms booted Lucky for a while and went with a wizard named

Quaker Oats Man Quaker Oats
The first U.S. trademarked cereal mascot all the way back in 1870. He was redesigned in the 1940s by artist Jim Rich and then designed again by Haddon Sundblom, the artist behind the Coca Cola Santa.

Cornelius Rooster Kellogg’s Corn Flakes
Cornelius was long proceeded by Corn Flakes’ first mascot, the Sweetheart of the Corn. Cornelius came on scene in the 50s in the opening animation for the Huckleberry Hound Show. A famous past slogan for Corn Flakes was “K-E Double-L O Double-Good. The best to you each morning.”

Pronto the Banana Kellogg’s Banana Corn Flakes
Pronto was all done by the mid-60s but I ask you, who calls a banana ‘Pronto?’

Snap, Crackle and Pop Kellogg’s Rice Krispies
The original Snap! Crackle! and Pop! were addressed as Mr. They appeared in a film in 1937/38 entitled Breakfast Pals with nemesis trio Soggy, Mushy and Squishy. Snap! Crackle! and Pop! also appeared in Woody Woodpecker cartoons after Kellogg’s sponsored the Woody Woodpecker Show. The elves were also featured in the closing credits for the Huckleberry Hound Show.

Champy the Lion Wheaties
The Wheaties’ character concept was for a real life sports figure to be the mascot for the cereal. Jack Armstrong had his own radio series in the 1930s. Jack was later followed by Champy the Lion.

Tom Mix Ralston Cereals
Pet food company Purina, parent company of Ralston, branded their human products under the Ralston name and their pet foods under the Purina name. Tom Mix, the 1930s cowboy on radio was introduced as a competitor to Wheatie’s Jack Armstrong.

Popeye the Sailor Man Wheatena
Popeye jumped from comics and cartoons to radio as the Wheatena hot cereal mascot.

The Cheerios Kid Cheerios
Cheeri O’Leary and Cherrios Joe Cheerioats
Cheerios was originally called Cheerieoats and featured mascots Cheeri O’Leary and Cheerios Joe who also appeared in the Sunday Comics. The Cheerios Kid appeared in the Mickey Mouse Club show hawking the benefits of Cheerios with his girlfriend Sue until the late 60s. Cheerios also used Rocky and Bullwinkle in as mascots in the mid-60s. A later, frosted version of Cheerios featured Frosty the Polar Bear as mascot. the Cheeri-Yodel stick figure man came along next, and the Peanuts gang rounded out the 80s as Cheerios spokes- kids.

Marky Maypo Maypo hot cereal
Marky had a little sister and cousin who featured in the original commercials.

Tony the Tiger Kellogg’s Frosted Flakes
Tony debuted in 1952 along with mascot Katy the Kangaroo but it’s clear who was the real winner. Tony also appeared with the Tony, Jr. cub in the 1960s and 70s and was featured in the closing credits for the Huckleberry Hound Show. Many years later he has a daughter named Antoinette.

Dig ’em Frog Sugar Smacks / Honey Smackst
Dig ’em was long preceeded by clowns Lou Jacobs and Paul Jung of Ringling Brothers Circus, and then Smaxey the Seal. Smaxey was featured in the closing credits for the Huckleberry Hound Show. Later Sugar Smacks brought out the Smackin’ Brothers as mascots that liked to box each other senseless over cereal. In the 70s a very macho Indian Chief on horseback replaced the brothers and finally the Sugar Smacks frog came along in 1972 with no name. He was called Dig ’em because of his line ‘dig ’em dig ’em’ in the adverts.

Poppy Porcupine Sugar Pops
Poppy was preceded by Sugar Pops Pete in 1958, a prairie dog in western getup who used a ‘pop-gun’ so turn bad guys ‘sweet.” Sugar Pops Pete was featured in the closing credits for the Huckleberry Hound Show. At some point Pete was axed in favour of an actual cowboy called Whippersnapper, then a John-Wayne sort called Big Yella

Trix Rabbit Trix
The Trix Rabbit was one of the only mascots to hawk cereal for the sheer fun of eating it, not for what it could do for the consumer, i.e. build muscles, give stamina, etc. The Trix Rabbit has never been assigned a first name. In 1976 General Mills held a kiddie election and children voted 99% in favour of the rabbit getting his beloved Trix. He was given a bowl and then told he’d have to wait for the next election to get another.

Sonny Cocoa Puffs
In early commercials for Cocoa Puffs Sonny appeared with an older cuckoo bird named Gramps who would use the cereal to do some really strange stuff to Sonny. Viewers complained Gramps was too evil and Sonny has been flying solo ever since.

Kaboom Clown Kaboom
The clown on Kaboom’s boxes was never named and is referred to as the Kaboom Clown for want of a better name.

Toucan Sam Kellogg’s Froot Loops
Toucan Sam was featured with his nephews in some Froot Loops ads as baby birds in diapers. Sam was redesigned in 1969

Lovable Truly Alpha Bits
Lovable debuted with Alpha Bits as simply the Postman but was redesigned and named after the contract between Post and voiceover artist Jack Leonard expired.

Linus the Lionhearted Post Crispy Critters
Linus was originally the mascot for Post’s cereal Heart of Oats and had been redesigned as friendlier and clumsier. Linus was succeeded by a muppet-like creature named Crispy.

Quisp Alien / Quake Quisp Cereal, Quake Cereal
Quisp and Quake were constantly trying to one-up each other for sales. Simon the Quangaroo was a side character and ally for Quake and after the Trix vote, General Mills decided to let the people decided which cereal should stay and which should bite the dust. During the 1972 presidential election, GM had its kiddy election: Quisp won. Quake was retired and then eventually Quisp was too but then was brought back by Quaker for another run.

King Vitamin King Vitamin
Later King Vitamins were portrayed by a live actor but he started out as a cartoon with foes Blue Baron and the Not-So-Bright-Knight. He seemed to be constantly getting milk dumped on him.